Redeem points directly at the checkout
You can redeem your available points when you purchase an item to get your discount.
View loyalty points
Description Ratings 39 Write a review Questions & Answers
Description
Close menu
Product information "Microsoft Visual Studio Enterprise 2017" 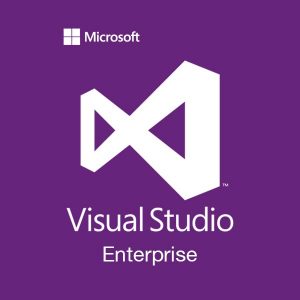 Microsoft Visual Studio Enterprise 2017 provides the environment needed for programming applications of any size efficiently and accurately. The IDE is suitable for both smaller programs and large projects with extreme complexity. The user can choose directly during the installation, which features should be available later. If programming for iOS is not necessary, then the corresponding tools are also not installed, which saves space. In operation, Microsoft Visual Studio Enterprise 2017 is very modest and easily deployable on older devices (more on the system requirements in the following section).

Also, the ready .NET code tools to build programs in Visual Studio 2017 on this codebase are the new features of this release. On request, this can be done with seamless integration of the cloud, so that Microsoft Azure applications, for example, can be processed fluently with Visual Studio Enterprise 2017. Team projects are also easier to tackle, regardless of which hosting provider is chosen. In addition, in Visual Studio Enterprise 2017, users can open any code file informally to create a separate project, which can significantly speed up working with smaller files.

Extreme language selection is another highlight of Visual Studio Enterprise 2017: from older languages like Visual Basic to C and C ++ as well as C# to TypeScript, Python or even web languages like HTML and CSS, Visual Studio Enterprise 2017 provides the right environment. So the program is suitable for office applications, media applications, games, network software, and virtually all other projects.

Processor: 1.8 GHz CPU or faster with two cores or more

Hard disk space: Depends on the number of installed features of Visual Studio 2017 between 1 and 40 GB

Graphics card: Provided support for a resolution of at least 1,280 * 720 pixels

The basic principle of software trading is the art of omission.
-Through volume bundling.
-No delivery and storage fees, due to virtual inventory management.
-Direct imports
-Long-term commitment to distributors.
-Low profit margin, main priority for it-nerd24 is the valuation and growth of the customer base.
-A centralized and lean administration.
-Quantity purchases from authorized suppliers/distributors.
-We do away with high-priced marketing investments, as we are more likely to value our regular customers in the sense of "recommend customers", we realize cost advantages that we pass on to our customers at favorable prices.

Ist dadurch die Qualität schlechter? Does it mean the quality is worse? We promise excellent quality to our customers. Prices do not affect quality in any way, our customers receive verified products.

Of course you will receive an invoice with reported VAT.

Cannot find an answer to your question? Directly write to us!
To chat
Ask a Question
Please note:
This product is a Download version. After receiving your payment, we will send you the download link for installation and the license key to activate the software directly by email.
Accessories 12 Similar products Customers also bought
Accessories 12
Windows 10 Professional 32/64 Bit